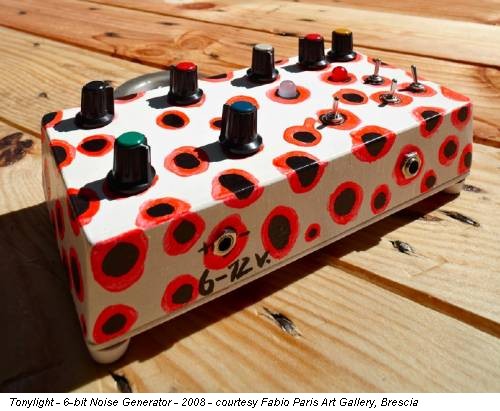 Is yet another show on video games. And even the classic format to media library, all documentation and little emotion. Playlist, exhibition curated by Domenico Quaranta for Centro Laboral Art and Industrial Creation in Gijon, Asturias, is an unconventional project.
The goal is to tell the creative manipulation of obsolete technologies, especially related to the world of video games, from a sound point of view.

As emphasized in the same catalog Quaranta, the music was the driving force of many revolutions in the field of visual arts, just think of such figures as Nam June Paik and John Cage, not to mention the importance of music research in the development of abstract. No exception to the new media art, the use of unconventional hardware and software reveals more than a debt of the more experimental electronic music. This can include the aesthetics of the glitch is so widespread, that plays with the unpredictability of the error and with the charm of the collapse of technology, founded in music and literally swept in that view.

Most of the works on display refers to a cultural movement known as the “8-bit movement”, which is pursuing a clinical score based on the manipulation of video game platforms have become obsolete (it also talks about chiptune music). With playful and anarchic attitude – not by chance that Malcolm McLaren had to call them “the next step in the evolution of rock and roll” – these artists are finding new uses for technologies that the consumer society has allocated to the landfill.